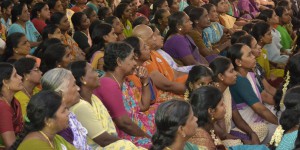 Despite Narendra Modi’s feel-good #selfiewithdaughter social media campaign, his government took a chainsaw to funding for women’s programs. Modi’s 2015 budget slashed funding for the Women and Child Development Ministry by over 50% from the 2014 budget. This was so harsh that it drove Modi’s cabinet minister Maneka Gandhi to join the opposition to demand a reversal of the cuts, to protect programs that support undernourished children, pregnant and lactating women, as well as empowerment programs for teenage girls.

Leaders in the BJP, Narendra Modi’s political party, have at times been actively promoting rape culture. Some of Modi’s political surrogates openly threaten rape to rivals, with BJP leaders like Gaur saying statements like “rape is sometimes right, sometimes wrong.” While Narendra Modi speaks about protecting women, Indian newspapers are filled with stories of Indian women and children being raped inside BJP offices, with Modi unwilling or unable to control his own party.

In his personal life, Narendra Modi’s decision to hide his abandoned wife, Jashodaben, has raised eyebrows the world over, with Modi subsequently refusing to either grant his wife a divorce, or give her first lady status.